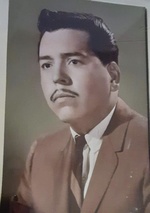 On August 6, 2020, Jesus Martinez, loving husband and Father of 4 went home to be with our Lord. He was 85. We were very blessed to have had such a wonderful Father. Jesus was born in the village of Temacapulin, Jalisco Mexico. The youngest of 3 children, his 2 older sisters succumbed to whooping cough when he was an infant. Jesus was 1 year old when his Father abandoned him at his Aunt’s home, and denied him his mother. He was 26 when he finally found and met his mother on his own. He met and married his lifelong sweetheart Martha in 1960 and soon had his first born, whom he named Marisbel. Jesus wanted a better life for his family and soon moved to Santa Barbara with his wife and daughter once they were granted permanent residency in the USA. Jesus worked 3 jobs, one as a busboy at a very well known restaurant. The Harbor and El Sevilla, and side jobs gardening in affluent Montecito. It was 1967 when he achieved the American dream and became a homeowner in Santa Barbara, Ca. But after moving into construction work, he had to make the hard decision to move again. In 1975, he moved his now family of 6 to Chula Vista, Ca. Retired from General Dynamics where he had been a Custodian for almost 20 years.
Jesus was a charismatic man, he had many friends and acquaintances. He had a contagious smile and everyone he met felt his warmth. He will be greatly missed by many. Jesus is survived by his wife Martha Martinez and children, Marisbel Salazar, Sergio Martinez, Elvia Castillo and predeceased by his son Mario Martinez. He was loved dearly by his Grandchildren; Vanessa Lutack, Jesus Salazar, Christian Castillo, Adrian Castillo, Jacqueline Martinez and Sergio Martinez Jr, as well as his 4 great-grandchildren.

All rights reserved. This obituary is also archived at obittree.com