To share your memory on the wall of Eugene Smith, sign in using one of the following options:

Eugene “Gene” or “Smitty”, as his friends called him, passed peacefully the evening of Sunday, October 6, 2019, at the age of 94 with his family at his side. He and his wife Pauline had just... Read More
Eugene “Gene” “Smitty” Smith

Eugene “Gene” or “Smitty”, as his friends called him, passed peacefully the evening of Sunday, October 6, 2019, at the age of 94 with his family at his side. He and his wife Pauline had just celebrated their 70th wedding anniversary on October 2,,2019. Gene’s birthday on November 16th would have been his 95th.

Besides being survived by his wife of 70 years, Pauline, he and Pauline had five children and is survived by four:
Arden Peters of Ramona, CA
Arlette Furrer of Hapeville, GA
Bernadette Clowers of Chula Vista, CA
Craig Smith (Deceased) Reno, NV
Clifton Smith of Lincoln, NE

Smitty proudly served in the Navy for 30 years, which included World War II, Korean War, and the Vietnam War. Part of his time in the Navy was spent with the Underwater Demolition Team (UDT); this team was a prelude to the now famed US Navy SEALS. He was stationed on the USS Merrimack, the USS Courier, and the USS Virgo. His Navy shipmates became his lifelong friends.

Gene was also committed to the Boy Scouts of America. He served as a Troop Leader, Wood Badge Director, and was awarded the distinguished service award, the Silver Beaver Award. He also had a reputation for his vast knowledge of knots, gaining him the title of “Mr. Knots”. He could always be found with a small length of rope to practice his knots during down time.

Gene and Pauline also were co-Girl Scout Leaders for many years which also included a trip down to the bottom of the Grand Canyon. Some of these girls are still in touch after 50 years!

Gene served his community in many ways, including being a foster parent for 20 years, working as a Special Events Traffic Controller for the City of San Diego Police Department, and serving in his church.

His other adventures included being a shuttle driver at the 1996 Atlanta Olympics where he drove the athletes from their housing to their events, working the National Democratic Convention, the 2003 Super Bowl, and the devastating Cedar Fires. A one-month adventure driving the Boy Scouts from border to border and coast to coast (including their Jamboree) was a joy for him.

While Gene and Pauline resided in Chula Vista for 74 years, his “other home” was in Kauai, Hawaii, one of his favorite spots in the world.

He was loved and will be missed by many.

In lieu of flowers, please consider a donation to the Gary Sinise Foundation or 1st Ward The Church of Jesus Christ of Latter-day Saints – Welfare Fund
Read Less

To send flowers to the family or plant a tree in memory of Eugene "Gene" Smith, please visit our Heartfelt Sympathies Store.

Receive notifications about information and event scheduling for Eugene

We encourage you to share your most beloved memories of Eugene here, so that the family and other loved ones can always see it. You can upload cherished photographs, or share your favorite stories, and can even comment on those shared by others.

Posted Oct 13, 2019 at 11:14am
Gene was an amazing man, I will miss him. His name was well known among scouters. He was the first Wood Badge Course Director that had females on his staff. Up until then it was just not done. He paved the way for many of us to serve on Wood Badge staffs and to become course directors.
His stories of his early life were unbelievable but true. There was nothing he had not done. Gene would go out of his way to help anyone in needs.
My heart goes out to his family and his sweet wife Pauline. The Smith family home was always full of excitement. He and Pauline had an amazing imagination always something creative going on. He will be so missed. 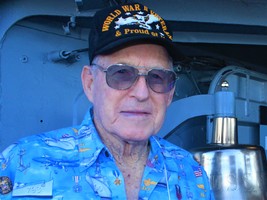