To share your memory on the wall of David Hole, sign in using one of the following options:

Print
David Walter Hole, 81, of Chula Vista, CA passed away on Monday, January 11th, 2021.
In February, his ashes will be laid to rest with military honors at Miramar National Cemetery in San Diego.

David graduated from Sweetwater High... Read More
David Walter Hole, 81, of Chula Vista, CA passed away on Monday, January 11th, 2021.
In February, his ashes will be laid to rest with military honors at Miramar National Cemetery in San Diego.

David graduated from Sweetwater High School in National City, CA in 1959. He was enlisted in the U.S. Army from 1962 to 1966, as part of the 82nd Airborne Division. He then worked as a meat cutter for 42 years. David spent his retirement enjoying golf, pool, and bowling, as well as traveling around the country to see his children. He loved his American Legion Post 434 in Chula Vista and was loved by so many people.

David is survived by his daughters- Susan McDaniel, Tammy Conner, Carey Burmeister, and Kimberly Richard. He was preceded in death by his only son, David W. Hole, Jr. He has one surviving brother, John Steven Hole, as well as many grandchildren and great-grandchildren. David will truly be missed.
Read Less

Receive notifications about information and event scheduling for David

There are no events scheduled. You can still show your support by sending flowers directly to the family, or planting a memorial tree in memory of David Walter Hole.
Plant a Tree

We encourage you to share your most beloved memories of David here, so that the family and other loved ones can always see it. You can upload cherished photographs, or share your favorite stories, and can even comment on those shared by others.

Plant a Tree in Memory of David
Plant a tree 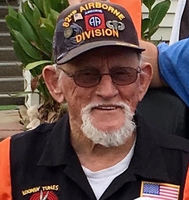